Credit card skimmers on gas pumps and ATMs are more common than you think — and anyone can get hit by them. However, there is now an app that might just stop you from getting stung in the future.

The app, available for Android, works by looking for a Bluetooth module nearby that’s used in modern credit card skimmers. The module sits on a palm-sized circuit board, and it can be plugged into a credit card reader, hidden from sight, which steals every card number that it reads.

Furthermore, using Bluetooth lets the perpetrator wirelessly download a list of card numbers from nearby, without drawing attention.

As smart as these skimmers are, the downside is that many of these skimmers broadcast their existence. Thus, meaning anyone who knows what to look for can spot them ahead of time.

Each of the modules uses the same default device name (“HC-05”) and pairing passcode (“1234”). The app can try to connect with the potential skimmer with the passcode. The module can be queried with a known command, “P,” which, if it returns an “M,” the chances are the app just spotted a skimmer within a few feet of you. 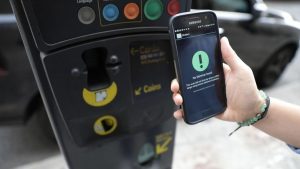