Fueling operations with 72 fueling points are not uncommon for CONRACs, and one even has 144 fueling points. So, what is a CONRAC?

CONRACs are consolidated auto rental agency centers. If you have traveled to Wayne’s Austin campus within the last two years and rented a car at Austin Bergstrom International Airport (ABIA), then you have visited a CONRAC. CONRACs consolidate multiple car rental agencies into one central facility. They are an outgrowth of airports strapped for terminal space and wanting to eliminate the congestion, pollution, and inconvenience of separate customer transport buses for each rental car company.

CONRACs also typically include QTAs, or Quick Turnaround Stations, where attendants refuel and clean the rental vehicles for the next customer. Consolidating all of the agencies in one location leads to very large fueling operations. For example, ABIA has 48 fueling points distributed across three parking garage floors. Fueling the vehicles with gasoline in a multi-level garage demands very complex installations with special ventilation fans and sensors. CONRACs are managed by third party facility managers who need a reliable way to dispense fuel and record all fuel usage so they can invoice each rental car agency for their usage.

Tom Glahn, Wayne’s fleet sales director, has been successful getting Wayne Select™ fleet dispensers with the in-dispenser iX Fleet™ fuel control system specified by the main engineering firms who design these large complex, multi-million dollar facilities. Traditional fleet fuel control systems have standalone authorization terminals that communicate to a central controller for authorizing and recording transactions. The engineers really liked the alternative design of the iX Fleet system which instead puts a space-saving and convenient authorization terminal directly in each dispenser side. The engineers also like that the Wayne in-dispenser terminals directly authorize the transaction without going back to a central controller with every transaction. This distributed system approach provides redundancy for a very reliable operation and allows the system to scale to very large operations without a drop in authorization time.

The iX Fleet in-dispenser terminals use the same Wayne iX™ technology platform as Wayne payment systems, except with a special fleet software application. One central iX Fleet fuel controller is used to enter authorized attendants and distribute the database to each terminal. The controller automatically gathers all of the attendant transactions from the dispenser terminals on a periodic interval so the facility manager can invoice each of the car rental agencies for their fuel usage. The iX Fleet fuel controller is based on the Wayne Fusion™ gateway controller running an iX Fleet SQL database application and a special sync service for communicating with the dispensers.

We are pleased to point out that almost all of the CONRACs built during the last few years, or currently in development, are using Select fleet dispensers with the iX Fleet fuel control system. Besides Austin, a partial list includes Salt Lake City (64 fueling points), El Paso (24), San Antonio (54) Portland Oregon (72), and Chicago (72). The next to come online is Tampa airport, with an amazing 72 dispensers with 144 fueling points, each with its own terminal – now that is one large “gas station!”
Special thanks for the hard work of the iX Feet project team of Tony Stewart, Tony Le, Dipak Mange, Frank Schneider, Bob Kay, Mike Loux and Curtis Hebert, who, along with the help desk, help keep these operations working successfully. They may be indirectly responsible for ensuring your next rental car is quickly available with a full tank of gas! 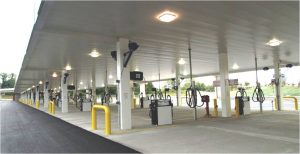